Why radically change the grape varieties, abandoning internationally renowned grape varieties in favour of complete strangers? For one essential reason, disease resistance and the promise of a truly pesticide-free vineyard. This is the wager I am going to tell you about…

It all started in 2007 with the acquisition of an organic vineyard near Agde. I was more attracted by the volcanic character of the terroir than by the organic approach. The systematic and almost exclusive use of copper and sulphur in organic viticulture, to fight against mildew and odium, seemed to me to contradict the ecological objectives. It was an opportunity to think about an alternative.

The trigger came at the end of August 2008, on a trial plot of Alain Bouquet near Montpellier. In complete anonymity, this breeder, who had been shelved by the INRA, had selected for many years disease-resistant grape varieties. Unfortunately, no collaboration was possible. But this visit encouraged me to go and meet other grape variety creators in Europe. In particular, I met Prof. Jorger Volker at the Freiburg Institute in Germany and Philippe Borioli and Valentin Blattner, private nurserymen near Neufchâtel in Switzerland. Each time, the level of resistance of their selections and the quality of the wines seemed promising for true organic viticulture. They were enthusiastic about the idea of spreading their work and getting out of the shadows.

Of course, we were heading for the unknown. Their grape varieties had only just crossed their border, and, above all, they had never been tested by the Mediterranean climate. But with my father, we took the risk, in January 2009, to plant no less than 7 ha with Swiss and German selections (0.5 ha/variety minimum). These large areas gave value and credibility to the observations. In ten years, resistance has only been confirmed. Even in 2018, with a very rainy flowering period, most of the varieties received no treatment. Only a few less resistant strains, such as Cabernet Blanc or Johanniter, required simple flower framing.

Over the years, by extending our partnerships to many countries such as Spain and Italy, we have created a vineyard that is unique in Europe. Our idea, a priori utopian, has become a reality. Today, more than 80 hectares of  the Colombette  estate are planted with these new grape varieties and obviously receive no synthetic pesticides but also no copper or sulphur. Nothing but sunshine and rainwater.
We are now well beyond the objectives of the organic and Ecophytos plans. In France, nobody can show such environmental results, especially on the scale of such a large estate. This decade of work has taught us a lot. Our vision of viticulture has changed a lot and we can only imagine our future through these grape varieties.

LONG LIVE THE SOWING OF pEpins!

To fully understand the nature of the change, one must be aware that nowadays the vine is reproduced by cuttings or grafting, or in a totally asexual manner. Clones have been created in this way. This phenomenon has been accentuated by the confiscation of selection work by a few research organisations. The plant is no longer able to evolve and gradually degenerates. Somewhere, the plant material that we use today is like fossilised, certainly since the French revolution…

The main idea of our project is to break this cycle by returning to sexual reproduction. So we need to sow seeds! This perfectly natural mode of reproduction makes it possible to recreate vino diversity. The plant is given the opportunity to evolve with its environment. By choosing the parents wisely, the winegrower can hope to obtain seeds in the offspring that combine resistance to disease and organoleptic qualities. Finally, we follow in the footsteps of famous hybridizers such as G. Couderc, whose research was abruptly interrupted at the end of the 1950s when the vineyard, like the rest of agriculture, switched to the chemical approach.

Since the Second World War, plants (like animals) have only been selected on the basis of their productive capacity. In the event of pest attacks, pesticides are relied on to solve the problem. In this system, disease resistance is once again becoming a priority selection criterion. Pesticides are only an ultimate and temporary solution.

Far from the standards, these grape varieties have in their ancestry some famous relatives like Chardonnay, Cabernet, others with a more sulphurous past like Marshal Foch, some with unknown or unpronounceable names like Kishmish vatkana, savages who arrived from faraway lands like Vitis amurensis or Vitis caribaea, or even some unsuspected adulterers who are finally welcomed. From this great crossbreeding were born these new grape varieties, far from standardisation.

It is above all a work of patience and observation. This research does not necessarily require a lot of resources. The winegrower can easily get involved. By reworking on the basis of local grape varieties, as we are now doing, he will be able to find solutions for a perfect adaptation to the terroir and climate change.

I couldn’t end without mentioning our militant commitment to make the approach known to our colleagues because it has marked this decade of work.

While the project should have reached a consensus, we came up against an administrative wall. We had to be more resistant than our vines. France-Agrimer refused the idea of experimentation. After two years of fighting, I demonstrated that article 120 bis of the 2007 BR allowed for experimentation without restriction. Vexed by this defeat, France-Agrimer and the Ministry of Agriculture published several texts to prohibit experimentation. With J. Ducourt, P. Bersac and S. Geoffray, we created the association PIWI France and campaigned for the registration and emergency classification in France of 25 European resistant grape varieties. Supported by inter-professions from the Languedoc and Bordeaux regions, we managed to get 12 grape varieties registered, including the famous Souvignier Gris. The last regulatory battle took place in the autumn of 2019, before the Conseil d’Etat, with the result that we won a great victory over the name Cabernet Blanc.

Over the last ten years, we have shared our experience extensively. We have received many colleagues, students, journalists and researchers. Faced with the influx of requests for visits, a discovery day was organised with PIWI France bringing together more than 200 winegrowers.

For our work, I was elected “Personality of the Year 2017” by the magazine Vitisphère. In 2018, I received the “Innovation Prize” from La Revue du Vin de France. Finally, in 2019, the magazine Terre de Vins awarded me the “Societal and Environmental Commitment” prize. A grand slam…

But our pride is that from now on, these grape varieties are colonising all the vineyards, even the most unusual ones like the vines of Montmartre. We are also reviving a wine-growing history that has been in abeyance for years. I leave you to meditate on these words of Georges Couderc at the International Wine Congress of Montpellier in 1911: “Drugs and remedies can only be temporary palliatives. Phylloxera has been defeated by American vines and not by sulphide; chlorosis by rootstocks from limestone soils and not by iron sulphate; mildew will be defeated sooner or later by the hybrids that resist it, all the copper in the world, moreover, would not be enough after a few centuries”.

1/   The resistant grape varieties are all hybrids

FALSE: A hybrid is an individual whose parents come from two different species, e.g. Vitis Riparia x Vitis lambrusca for the Clinton. This is not the case for modern grape varieties resistants that we cultivate. They are registered with international authorities as Vitis vinifera. It is true that their ancestry includes wild vines, which explains their resistance. But we have to go back several generations to find it. It is so diluted that it is not taken into account. French institutions have a more conservative position…

FALSE: All modern resistant grape varieties are the result of natural sexual reproduction. They are selected from seedlings. There is no genetic manipulation.

3/   PIWI is a television programme for children

TRUE: But it is also a European association of researchers, nurserymen and winegrowers, all committed to this new path of resistant grape varieties. PIWI is the acronym of the German word “Pilzwiderstandsfhig” meaning “capable of resisting the fungus”.

FALSE: It takes about 15 years of selection to create a resistant grape variety. Afterwards, there is a whole purely administrative process with the CTPS and the Ministry of Agriculture to register and classify it in order to be able to market it. Normally this takes 5 years. But the French public institutions are protectionist. For a private breeder, and a fortiori a foreign one, this period approaches ten years…

TRUE: But administratively, they have to be integrated into the specifications and it’s a long process. On the other hand, there is no doubt about the qualitative potential and the ability to make great, complex wines for laying down.

How to create a resistant grape variety?

The principle is to choose a hardy grape variety and a more qualitative one.

To carry out the crossing, a strictly female parent is required. As the vine flower bears both male (stamens) and female (pistil) organs, the stamens must be cut off to make the flower strictly female.

Once castration is complete, pollen is pollinated with pollen collected from the other parent and the bunch is protected with a sachet.

In September, the bunches are harvested and the seeds are extracted. 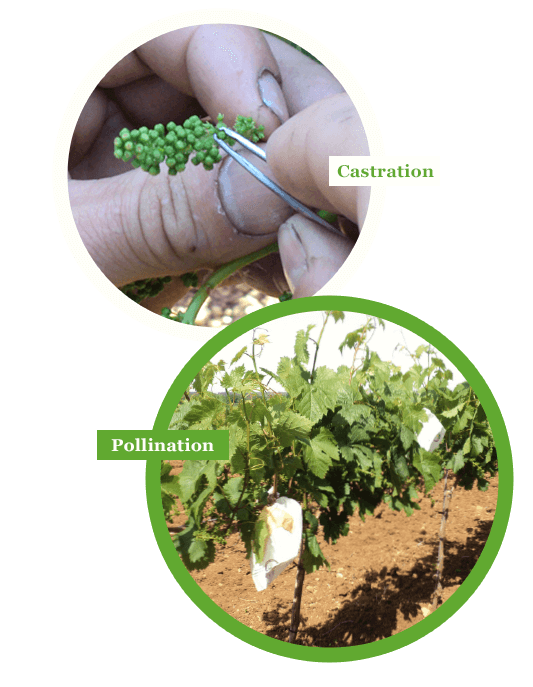 Carefully preserved in winter, the seeds are sown in spring.

After germination, little by little diseases appear. Only perfectly healthy seedlings are kept.

The best seedlings are transplanted into a larger space to bear fruit. 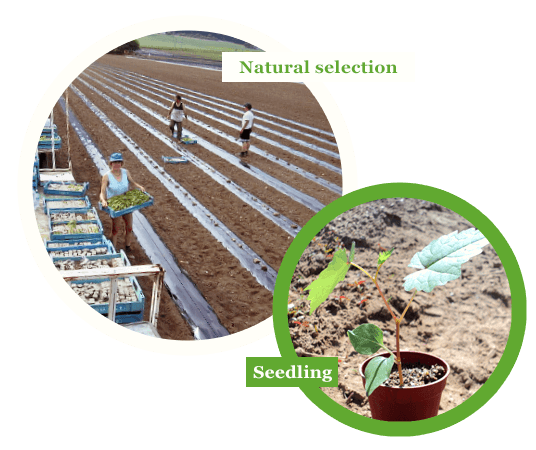 This is the most intuitive stage for resistant and fruit bearing plants, it is necessary to identify those capable of making great wines.

Selected individuals are replanted with enough plants to consider vinification.

The selected individuals are vinified to validate their quality. At this stage we are approaching the tenth year after the basic crossbreeding.

We are beginning to move towards more applied experimentation. The plants that have passed the vinification stage are developed to validate on a scale of half a hectare. 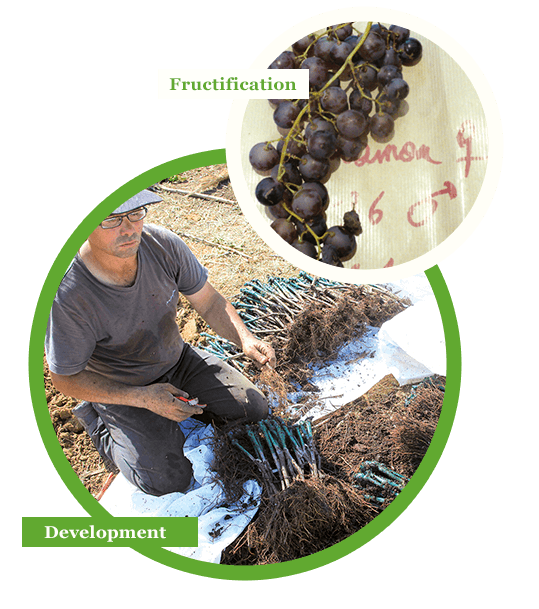